[Update]
As per Jason’s comment, with a new ILO4 update HP apparently has fixed an issue related to booting from SD cards. Whether this is the same issue is unclear though since the original KB article I linked to has not been updated.
[/Update]

Important note: The general symptom of such a Red Screen of Death described here is NOT specific to ESXi or booting from SD cards in general. It can happen with Windows, Linux or any other OS as well as other boot media such as normal disks/RAID arrays, if the server has a problem booting from this device (broken boot sector/partition/boot loader etc).

A couple of weeks ago I was updating a few HP Proliant DL360p Gen8 servers running ESXi on a local SD card with ESXi patches via VUM, so business as usual. Almost, because on one of the servers I ran into the following issue:
After rebooting the host, the BIOS POST completed fine and the Proliant DL360p Gen8 server should now boot the ESXi OS from it’s attached USB SD card where ESXi was installed; but instead it displayed this unsightly screen telling  something went very, very wrong:

I reset the server several times via iLO but the issue persisted and I had no idea what exactly went bonkers here. Then I decided to boot a Linux live image, which worked fine, narrowing down the issue to the OS installation (device) itself. I thought the updates corrupted the installation but that actually wasn’t the case.
When attempting to mount the SD card USB drive from within the live Linux I noticed it was actually completely absent from the system. The USB bus was still ok, but lsusb showed no SD card reader device in the system at all!

Just to make sure I wasn’t imagining things I booted an ESXi installation medium too and likewise, it didn’t detect the local SD card but only the local RAID controller volume: 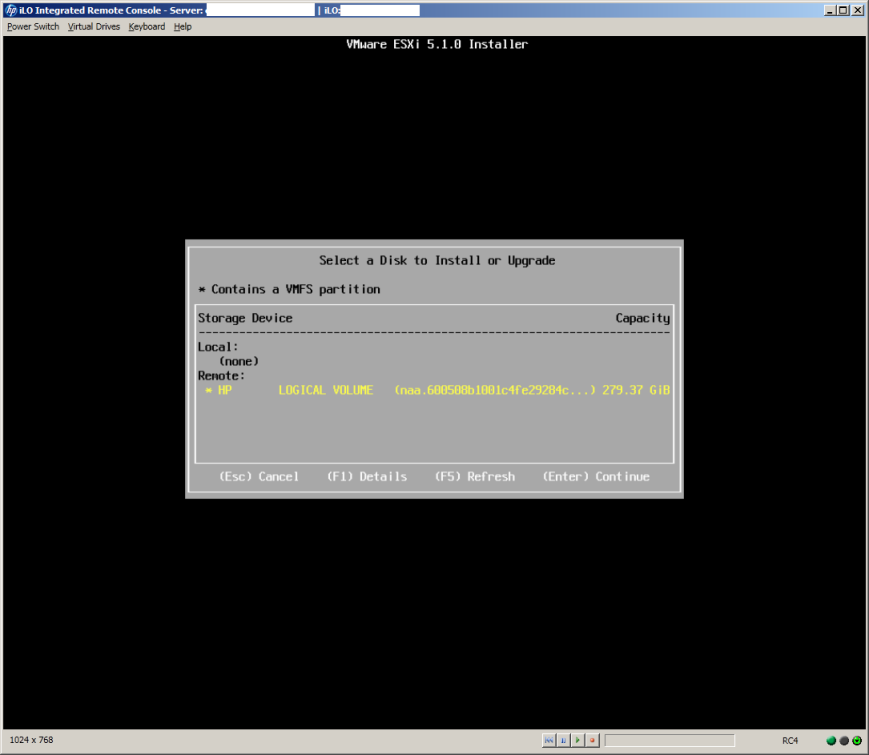 So the Illegal OpCode Red Screen of Death was probably the result of the server trying to force a boot from the local RAID array volume, which is a pure GPT VMFS5 volume without a proper boot partition.

I first thought the SD card reader or SD card was faulty but after googling around for a while I stumbled upon this article:
HP Advisory: ProLiant DL380p Gen8 Server -Server May Fail to Boot From an SD Card or USB Device After Frequent Reboots While Virtual Media Is Mounted in the HP Integrated Lights-Out 4 (iLO 4) Integrated Remote Console (IRC)

The article only mentions DL380p Gen8 servers but I imagine the same could apply to DL360p Gen8 or other servers as well. The problem description doesn’t really fit all that well either to my case but I tried cold booting the server as instructed. And this did the trick. After leaving the server powered-off for about 5 minutes and powering it on again, it detected the SD card again and booted up the ESXi installation on it fine.
For good measure I rebooted the server another time, which also went without a hitch.

The key takeaway here:
1. As per the mentioned HP Advisory, the USB SD card device of a Proliant 380/360 Gen8 server might randomly disappear during a reboot, so be aware of that and try cold booting the server in that case.
2. When dealing with an Illegal OpCode boot error on a HP Proliant server like shown above, make sure you have a valid boot device and the BIOS is properly configured to boot from this device.
On a physical Linux host for example the grub boot loader might be corrupted, which can easily be fixed by re-installing grub with a live Linux. I’ve had that happen to me with physical Linux servers before.